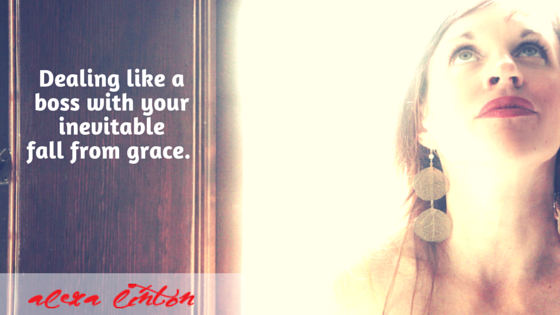 If you’re a leader, if you’re a follower, if you’re a loud mouth or the person that hangs in the corner pretending you’re invisible. You can’t stop the fall. At some point or another someone who has thought you absolutely magnificent, with rainbow farts and shit that definitely doesn’t stink and is chock-a-block full of glitter, will realize that you are a mere mortal, flawed and all, and with this realization you will come tumbling headlong off their pedestal. It goes without saying that we would rather not make that particular trip and that given the choice, it sure is nice to be worshipped every now and again. But, realistically, at one point or another in your life, you too will fall from grace, out of someone’s good books and into, well, somewhere entirely different. And this little diddy is here to help you navigate this not-so-fun inevitability so gracefully that your fall from grace has no choice but to lift you up.

First, let’s have a brief but thorough look at the dynamic that is falling off one’s pedestal. Because it is through this exploration that we can more deeply understand that this pedestal only affects us if we buy in to a very specific concept. And that is the idea that we could, in any way, be better or more or greater than anyone else.

I would suggest that most of us have little choice but to buy into exactly this concept, given that we are marinated in its competitive and comparative juices from birth. We are trained and encouraged to excel, be the best, bigger, better, stronger, smarter, more successful and to perceive ourselves on countless scales of achievement or lack there of. We often feel a strange sense of lifting up when others fall from grace. Our brains are programmed to compare and conquer. There are literally parts of our brains that revel in the fall from grace of another, because it means that maybe, perhaps, we have become better, stronger, greater, smarter or more together than another, and not just any other, but one who we once admired. And that, to some strange and slightly sadistic parts of us, is indeed a thrill.

When one falls from grace, it is most often a surprising kerplunk. Because, humans tend to be terrible communicators on this level, it is, by majority the case that you have no idea you have tumbled until it is much too late. Because the fall from grace is like a trip wire, and everyone’s trigger is a little different. But there is a bright clear light at the end of this tunnel. Because this means one very important thing – your fall from grace very often has pretty much nothing to do with you. Yes, you might have screwed up, maybe even royally. Yes, you may have shoved a foot so far down your throat you wonder if you’ll ever be able to pull it out again. You, after all, are a mere mortal. But, your splat from someone else’s pedestal is entirely up to them and is often precipitated by their perception of you as some kind of perfect god-like creature in human form, rather than the flesh and blood and full-of-interesting-stuff human being that you actually are.

So here’s the real question. Can you accept your fall from their pedestal gracefully?

Translation: Can you accept on the deepest level that you aren’t perfect, at least when it comes to our rather skewed definition of the word (which is often, make no mistakes ever or else) and probably never ever will be? That you are growing and changing and learning along with the rest of us mere mortals and that takes patience, time and a heck of a lot of humility? And that that perfect imperfection is what makes you the awesome sauce that you are? This acceptance, of you as you are is the sure-fire way to fall gracefully from someone else’s grace. Because in this way, you embrace all of who you are, and the result is something that changes everything forever about how you perceive your world.

At the end of comparison and competition lies a place that is way more rocking and potent than all of that. It is where armour gets dropped at the door and weapons are laid down to rest, where the need to protect and conquer transitions into the need to connect and to love and collaboration becomes the weaving thread. It is where creativity reigns supreme and grace actually lives and breathes.

You will fall off countless pedestals. And people in your life that you saw as greater, bigger, better than you will fall off yours. The day will come when you will trip their wire, or they will trip yours. Regardless of where they arise, these pedestals that we have all created have had their time in the sun and, frankly speaking, it’s high time to let them go, both for the sake of ourselves and all the poor folks that we’ve put up on them, thinking that somehow they’re way more _______(insert descriptive here) than we are. Because these very pedestals are a sure-fire road to disappointment on one side and crash and burn on the other – let’s call it a lose-lose shall we?

You know what’s truly graceful? Honouring exactly where each person is at in their journey while acknowledging that not a one of us has it all figured out. Acknowledging that each of us will be a teacher and each of us a student. And it is natural for it to shift roles continuously as we stretch and grow into ourselves. It is always graceful to acknowledge the wisdom of another. And always graceful to be grateful for the opportunity to learn and the opportunity to share the wisdom you have gathered. And what is most graceful of all is to connect without judgement and move towards deeper connection and understanding in everything that you do. From here, from this place, anything is possible.